As we travel the highways and city roads, we try to avoid being involved in an unfortunate incident that happens unexpectedly and unintentionally, resulting in damage and/or injury, i.e. an accident. One of those unplanned events is the rollover accident, the leading cause of mortal injury and generally a destroyed vehicle. A rollover is when a vehicle rolls or tips over to its side or top and may incorporate more than one roll. Rollovers have the highest percentage of fatalities related per event than other accidents. In our human need to assign labels and categories it is no surprise that there are two primary categories of rollover accidents. These are the tripped rollover and the untripped rollover accident.

Tripped rollovers are caused by external forces operating against the vehicle. Hitting a curb or collision from another vehicle are examples of the tripped rollover. Tripped rollovers account for 95% or more of rollover events. Road construction and design may contribute to the tripped rollover. Road shoulders and the verge (the graveled area just beyond the shoulder) and contact with the railings can contribute to a rollover event. Slopes steeper that 33% are ‘critical slopes’, and older down-turned railings where also found to be contributory to rollover accidents. A sideways slide into a curb or the outer wheels to dig into a soft shoulder contributes to about 71% of all rollover accidents. By knowing the characteristics of vehicle under your current traveling conditions, with or without a trailer, raised suspension or other factors that contribute to rollovers may prepare you to prevent a rollover event. Vehicles with added weight on the roof rails heighten the center of gravity and provide more surface area to catch wind forces that maybe present.
Untripped rollovers are caused by the destabilization of a vehicle taking a turn at higher speeds and are caused by the centripetal forces encountered in taking a turn through high speed on a non-banked curve. Many untripped rollover events involve top heavy vehicles. Most military vehicles operate with a wide track width for higher stability. The higher center of gravity in raised off-road vehicles such as four wheelers also contribute to destabilization in a curve at excessive speed. Short track vehicles like some SUV can be problematic in turns. Most of these come from the factory with a roll cage. A high-profile vehicle like vans and boxy dry van or refrigerated trailers for tractor-trailer rigs, also may roll in high winds. Any vehicle with a large area ‘slab’ side will be at the mercy of the wind. At speed a vehicle is ‘pumped’ on kinetic energy. This is detrimental at high speeds going into a non-banked turn, because the mass of the vehicle wants to go straight. Centripetal forces (centrifugal – but it is not a proper term) are introduced and results in these forces overcoming the vehicles stability into a turn. The forces of mass in motion can be convoluted to say the least. Sir Isaac Newton developed early calculus to deal with the mathematical description of objects in motion and the forces acting upon them.

Car and light truck construction bodies depend on folds and creases to build in strength. Roof supports are adequate for normal road conditions but are found wanting in rollover situations. Because of this add-on roll bars and cages are installed in competition vehicles. Most jeeps have roll bars installed at the factory, a drag racing, road racing and cross-country off-road machines all incorporate roll bars. Many require a five-point harness and elbow straps to keep the arms from flailing outside of the driver/passenger compartment, but still allow driving control of the vehicle. Reason is that these machines have a high rollover potential due to the forces encountered during operation and the latent probability of an accident.

Unless equipped with a rollover cage, like race cars, most vehicles are ill-equipped to survive a roll over. There is minor protection for the occupants as the supporting columns for the roof is incapable of resisting collapse. When considering the mass, speed and kinetic forces at play it is no wonder rollovers are as dangerous as they are. Know your vehicles characteristics and drive safe. Whenever you do need a tow or roadside assistance, call Randy’s Towing & Recovery Service! 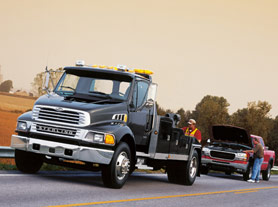 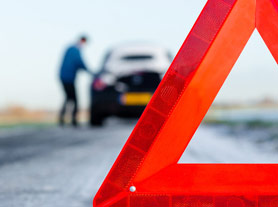 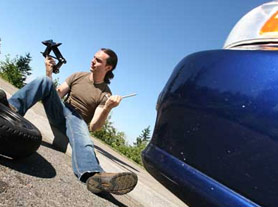 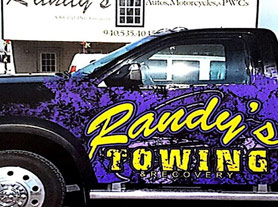